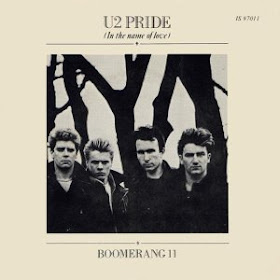 U2's The Unforgettable Fire was their break-through album which gave them a taste of success in America before they went supernova with The Joshua Tree. A key part of that was the first single, Pride which stormed up the charts.

The single struck a minor chord as listeners quickly realised the song was about Martin Luther King, the man who had a dream that America would be come a country where everyone was considered equal.

The album also featured a second song, MLK, which was a poignant end to the album.

These two songs were part of Bono's burgeoning interest in American history and the civil struggles black people face(d). U2 would later explore more of America's 'blues' in Rattle and Hum.

Pride (In the name of love)


This song was a fairly political piece written by Bono about rights activist Martin Luther King, Jr. It is one of the U2's most recognized songs and is frequently played live.

Pride was major commercial success for the band and has since come to be regarded as one of the band's best songs. It was named the 378th greatest song by Rolling Stone Magazine on their list of the 500 Greatest Songs of All Time.

Pride's lyrical theme was originally intended to be about US President Ronald Reagan's pride in America's military power but Bono was ultimately influenced by Stephen B. Oates's book Let The Trumpet Sound: A Life of Martin Luther King, Jr.

and a biography of Malcolm X.


We trust you get what MLK stands for.

The other song from The Unforgettable Fire album that references the American civil rights proponent.

Sang as a dreamy lullaby of sorts, its lyrics suggest that the following generations will be able to sleep easy following the hard work of Luther.

I think what Bono is meaning is that they can dream now that Luther's own 'American dream' has in many ways been and continues to be realised.