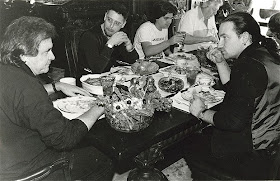 U2 have a fondness for Johnny Cash that has been reflected in their music and the love between the them has been reciprocated in their recordings and comments to the media.

While U2 like to comment on american culture and politics, they haven't lived through America's eyes like Johnny Cash did.  He's taken all the drugs, acid, drank all the beer and been everywhere, man. So When Johnny Cash teamed up with U2 to sing on Zooropa's The Wanderer, Cash had a field day with Bono's lyrics.

While he's ostensibly singing about a man searching for God in some kind of strage post-Apocalyptic world, Cash is singing about that part of American culture that want everything they can have - being the 'kingdom but how they don't want God in it'.

Despite every American President continually asking God to Bless America, church attendance is falling in America and falling fast and Cash knew it. He's perhaps suggesting that American's want the nice things, but aren't prepared to put in the effort.

You could argue that when Cash did a cover of U2's One, he's talking about America's confusion about Jesus but it's really just a break up song......

When Johnny Cash died Bono said, "He showed me his house, his ranch, his zoo (seriously, he had a zoo in Nashville), his faith, his musicianship. He was more than wise. In a garden full of weeds the oak tree." Wise words indeed.

U2 did get another thing right about The Solitary Man, they were right that Elvis would have been a sissy without Johnny Cash!
No comments:
‹
›
Home
View web version