U2's songs written about Africa and its people 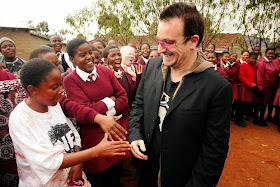 U2's songs written about Africa and its people


U2 have sang many political songs over the years and many of them focus on the struggles of people within certain countries, here's a few songs related to Africa.

A non album track by U2, it was used to promote the film which tells the story of Nelson Mandela's A Long Walk to Freedom.

An anti-apartheid song written with Little Steven to protest the oppresion of the South African people by the regime that existed at the time.

Where the Streets Have No Name

A song inspired by Bono's work in Africa in the early 80s. The song's lyrics are a juxtaposition of the U2's early live in Belfast, Ireland where one could tell another's religion by the area in which they lived.


Crumbs from your table

Don't Give Up (Africa)

Bono did a cover of this song with Alicia Keys. It was originally recorded by Peter Gabriel and Kate Bush.