The Miracle (of Joey Ramone) lyrics by U2 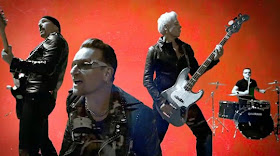 The Miracle (of Joey Ramone) lyrics by U2

The Miracle is the first song from U2's album Songs of Innocence.

It's an ode to U2's love of the Ramones, a band they consider very influential on the themselves. U2 have previously covered Beat on the Brat by the Ramones and the song, In a Little While from All That You Can't Leave Behind was also dedicated to Joey Ramone following his death.

Marky Ramone, a longtime Ramones Drummer said of the track 'I’m very grateful U2 wrote a song about my former friend and bandmate Joey Ramone. Joey would have been honored. It is well-deserved.'
The song was produced by three players Danger Mouse, Paul Epworth and Ryan Tedder.

I was chasing down the days of fear
Chasing down a dream before it disappeared
I was aching to be somewhere new
Your voice was all I heard
I was shaking from a storm in me
Haunted by the spectors that we had to see
Yeah, I wanted to be the melody
Above the noise, above the herd

I was young, not dumb
Just wishing to be blinded
By you, brand new
And we were pilgrims on our way

Check out the lyrics to The Troubles, also from Songs of Innocence.